Shaping Solutions that Go Beyond the Box

Designers relish the chance to shape highly creative solutions for their clients. Some of my most favorite projects are those where I’ve had the license to really think outside the box. Or on the case of the above project, while using an actual box.

The Archives Partnership Trust planned a special commemorative event, "Beyond the Vote," to celebrate the Centennial of the Women’s Suffrage movement and discuss the issues that women still face today. With ties to Oprah Winfrey, they were hoping to have her moderate the event. But to capture Oprah’s attention, they needed a truly unique proposal to send her. And, what could be more appropriate for an event celebrating a woman’s right to vote than a ballot box?

Using an image of a suffra 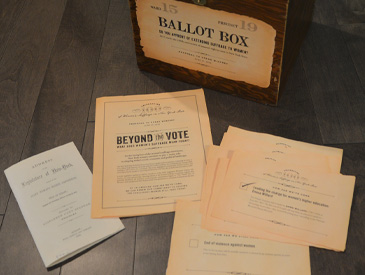 ge ballot box found during my research as reference, I designed a tattered-looking label to affix to the outside of an old ballot box we found at an antique store. The proposal was designed to look like a historic document with a vintage parchment paper background and typography that was representative of old broadsides. We also created a series of “ballots” that contained either a historical accomplishment of the suffrage movement—in which the ballot was checked—or an issue women still struggle with today—for which the ballot remained unchecked to show how far women still have to go in reaching true equality. The proposal and ballots were placed in the ballot box along with a replica of Elizabeth Cady Stanton's speech and sent to Oprah. Disappointingly, she was unable to attend, but it is an honor knowing I designed something that crossed her desk.

As part of a comprehensive marketing campaign we developed for Parks and Trails New York to promote cycling along the Erie Canalway Trail, we created a unique press kit to accompany the announcement of the website launch. Because our resources were limited we were only able to mail 50 kits, so we wanted to make sure those packages would have maximum impact and really capture the attention of their recipients.

On the outside of the box, we 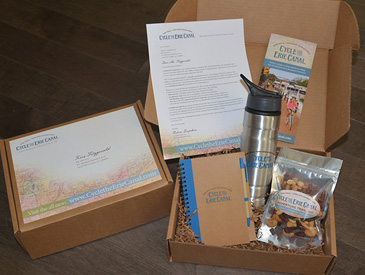 designed a large label with the Cycle the Erie Canal (CTEC) branding elements we had developed for the campaign. Inside the box, we included a water bottle, trail mix, notepad and pen, letter introducing the new website, a brochure, and an ambassador card (a business card handed out by PTNY’s trail ambassadors encouraging visitors to check out the new website). All of the items were branded, so that even if they just sat on a shelf, they would be a reminder of the adventures that were waiting along Trail.

The kits were distributed to a highly targeted list of media outlets. As a result, the CTEC launch was mentioned on high profile sites like abcnews.com, nytimes.com, washingtonpost.com, washingtontimes.com uk.nes.yahoo.com, and more.

Invitations often offer the most opportunity to think differently, and over the years, my work with Albany Medical Center offered plenty of chances to design some very unique ones.

For “Threads”, a fashion fundraiser to benefit their Food Positive Program, rather than create a traditional folded card, the invitation package was designed to look like a fabric swatchbook. It consisted of a series of different colored floral pages containing the event details, all of which were printed on a linen paper stock to further emphasize the concept. Included in those panels was a perforated response card for respondents to tear out and return. The panels were die cut to look like they had been trimmed with pinking shears, tucked into the fold of a white linen swatch cover, and then stitched with red thread which was left hanging on each end. The creativity of this project was awarded an Albany Ad Club “Nori” Award. 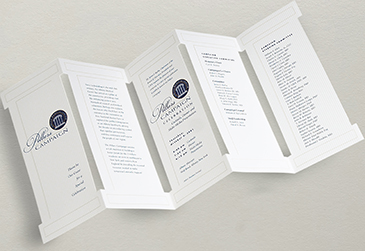 Another invitation for the Medical Center was for an event celebrating the kick off of their Pillars Campaign. The main entrance to the historic hospital building is supported by a series of white columns for which the campaign was named. The invitation was designed to look like a series of five die cut pillar panels, representing the five “Centers of Excellence” that were the focus of the campaign. The materials were printed on Neenah Paper’s Columns paper stock, a white ribbed cover stock that also pairs nicely with the concept.

In each of these instances, I used the underlying concept of the project to craft a memorable solution that was far from ordinary.

Like many designers, I like to collect things—beautiful paper, type, and images, as well as creatively-designed packaging, cards, books, brochures, magazines, and journals. I am always on hunt for new treasures. Those things also include new recipes, striking fabrics, unique yarn, or anything that has been or can be crafted into something special, probably because I have spent my entire life making things. But objects are not the only things that I collect. Stories, experiences, places, and ideas all end up in my personal archives as well. All of these things influence my life and the designs I create, and this is my place to share them.